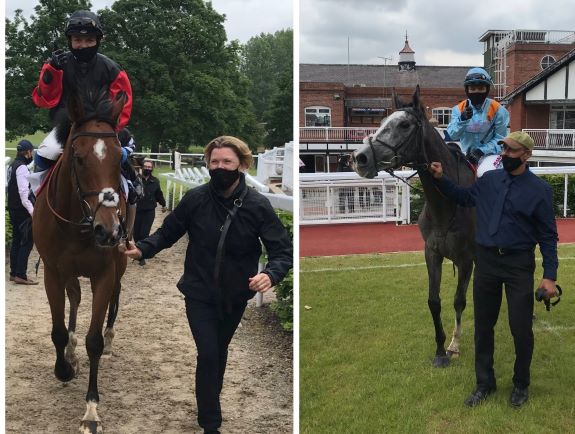 First double on the Flat

I was thrilled to have my first double on the flat on Wednesday at Pontefract and it felt even better that both horses were very well ridden by my daughter Megan who is top value for her three pounds claim.

I’ve hardly ever had two runners on the flat on the same afternoon so this double was certainly a red letter day for the family. First Megan struck late in the staying handicap on Oleg who kept on stoutly to snatch the verdict in the final strides.

She again played her cards late on Christopher Wood who finished strongly in the twelve furlong handicap to beat Monsieur Lambrays in another tight finish.

I thought that both horses looked fabulous when I walked round the yard on Tuesday afternoon. They were definitely fit despite not having run in the past three months and their coats were gleaming. They were our first winners from Ditcheat since we enjoyed a treble on Saturday, March 14 when Truckers Lodge deservedly stole the headlines with a great success in the Midlands Grand National and Mcfabulous winning the EBF final at Kempton. Two days later all sport was cancelled as part of the lock down that has paralysed much of the country.

Currently we have a team of 20 summer jumpers ticking over nicely ahead of the return to action scheduled on July 1st. Plus a squad of a dozen or so for the flat. I’ve entered four for a new staying handicap at Royal Ascot on Tuesday while Red Force One and possibly Christopher Wood could both run in the one mile, six furlong handicap on Thursday.

Oleg, meanwhile, has improved no end this year and is on course for Glorious Goodwood.