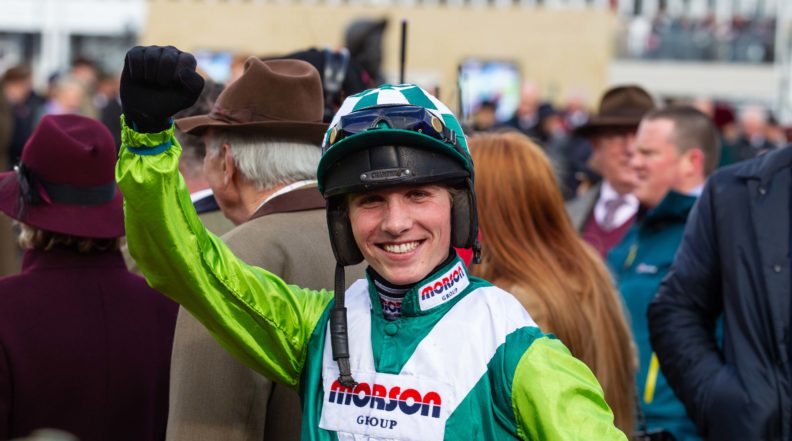 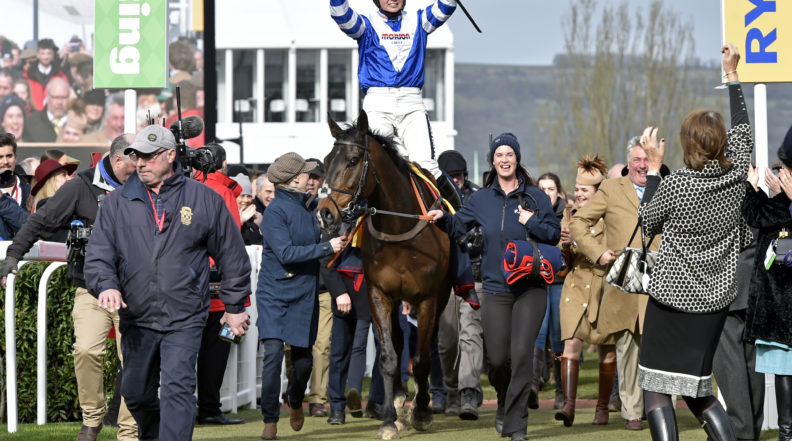 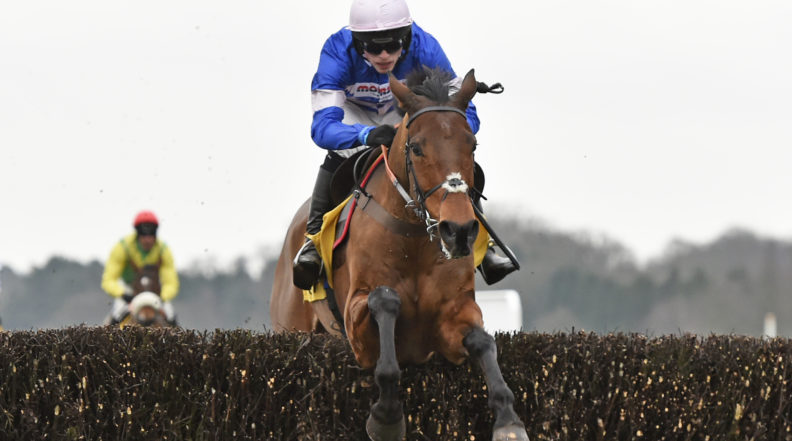 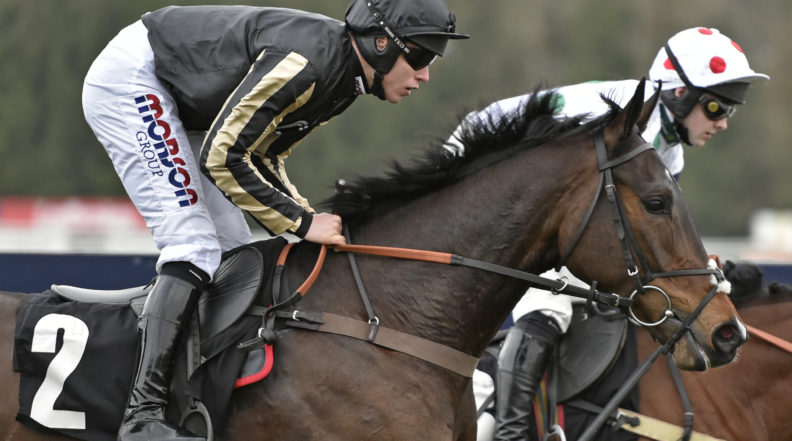 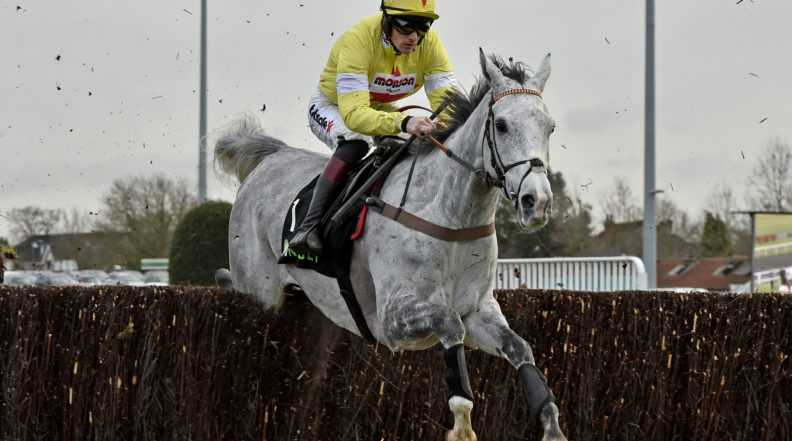 At Ditcheat we have a superb team of jockeys led by the top class Harry Cobden assisted by Sam Twiston-Davies and Bryony Frost, backed up by some up-and-coming conditionals Lorcan Williams, Bryan Carver and Katie O’Farrell. We also have Angus Cheleda in the amateur ranks.

2015/16 was the first season Harry spent at Manor Farm Stables and he made quite an impression. Within months of arriving he recorded his debut Cheltenham victory aboard Old Guard, a month later winning the Grade 3 Greatwood Hurdle aboard the same charge.

Since the days of his champion conditional campaign Harry has not looked back and is now at the top of the roster of jockey’s in Ditcheat.

Since his appointment as stable jockey Harry has competed at the highest level with the composure and skill of a man far beyond his years. Wins in Grade One company have cemented his position aboard the likes of Topofthegame in the RSA Chase, Cyrname in the Ascot Chase, Politologue in the Tingle Creek and many others.

Harry is a very hands on stable jockey and spends five mornings a week at the yard working and getting to know the horses as well as possible. He is an exceptionally calm rider on the big day and in a short space of time has already established himself as a top class jockey.

With over 1000 winners to his name including eight Grade One winners and four Cheltenham Festival winners he is already established as one of the best jockeys riding today. Originally from Naunton in Gloucestershire Sam is the son of Gold Cup winning trainer Nigel Twiston-Davies with whom he has achieved some notable career highs. Sam broke on to the scene as an amateur when landing the Cheltenham Foxhunters aboard Baby Run in 2010 before turning professional at the end of that season.

A Conditional Jockey’s title quickly followed, in a season that saw him claim the prestigious Paddy Power Gold Cup and the Becher Chase along the way. More recently Sam has played a key role in some memorable victories for Team Ditcheat. He recorded his first winner for us at Wetherby in November 2013 shortly before steering the legendary Tidal Bay to victory in the Grade Two West Yorkshire Hurdle on the same card. Sam rode over 100 winners in one season for the first time in the 2013/14 season and recorded his first success as number one jockey at Manor Farm Stables aboard Pressies Girl in May 2014.

He has now gone freelance for this coming season but will continue to be a huge part of the team in the future and will still ride for us regularly.

Daughter of legendary Grand National winning jockey Jimmy Frost. Bryony rode as an amateur jockey from the age of 16. She won the National Novice Title, the Devon & Cornwall title twice, Wessex area once and in 2016 the National Hunt Girl’s title. In March 2017 she rode her first Cheltenham Festival winner on Pacha Du Polder in The Foxhunters.

After turning conditional in the summer of 2017 Bryony has not looked back enjoying a champion conditional campaign (2018-19) with her finest victory coming aboard Frodon in the Ryanair. That win made Bryony the first ever lady jockey to win a Grade One chase at the festival and provided her with just one of many fine days. Bryony is already no stranger to the big days and has captured the racing public’s imagination by making history at the festival, she continues to be a helpful asset to the yard at home and on the track.

Like many of our other young men with licenses in the yard, Lorcan left school after completing his GCSE’s and has quickly made a good impression within the yard.

Pony racing was his way into the sport and a friendship with Sean Bowen encouraged him to move from his native Wales to learn his craft here at Manor Farm Stables. After a successful amateur campaign in 2018/19 season that saw him crowned as National amateur champion jockey Lorcan took the plunge and turned conditional.

Now heading into his third season as a conditional rider Lorcan boasts a wealth of experience for a rider of his age having ridden some high class horses on numerous big days. The 2019/20 season provided Lorcan with his finest day in the saddle when winning the valuable Midlands National aboard Trucker’s Lodge, who having only his fifth start over fences got him jumping brilliantly throughout the race to record an impressive and memorable success.

Lorcan is a naturally very good rider and hopes to continue his journey as a jockey whilst his weight allows.

Bryan, a proud Cork man, first sat on a horse aged 16 and soon after became interested in the racing game. His first taste of thoroughbreds came when he attended the stables of Irish trainer Mick Winters’ on his weekends, riding in point to points on his own horse when he could.

In December 2016 Bryan took the plunge and moved to England, his first port of call was David Pipe’s where a broken leg stunted his progress.

A move to Will Biddick’s proved an inspired one with Will helping him with his point to point contacts enabling Bryan to improve as a rider and success followed in the pointing field which gave Bryan the confidence to turn conditional for the 2019/20 season.

That once again proved the right call to make as Bryan enjoyed a fruitful campaign riding 23 winners gaining some excellent contacts along the way outside of Paul’s yard. Having only started riding at sixteen years old Bryan is still improving his style, strength and technique all the time and there is no doubt his best days in the saddle are very much in front of him.

Katie joined us in October 2019 having enjoyed success in her native Ireland, where, after riding as an amateur for four years whilst studying at University, she turned pro in the Autumn of 2015 riding 30 winners of the past four seasons as a conditional rider.

Katie has worked for some of the top names in Irish racing from Aidan O Brien, Gordon Elliot to multiple time champion trainer Willie Mullins, for whom she enjoyed her finest victories for aboard Low Sun winning two Graded Handicap hurdles for the Ricci’s. Throughout her career Katie has been plagued by frustrating and serious injuries and felt it the right time to try her luck in England, she is a calm and thoughtful rider who is a popular member of our team of jockeys.

Angus joined us in the summer of 2019 having spent the past five years working for Dorset based trainer Colin Tizzard. From a family of farmers Angus has ridden ponies and horses his whole life and whilst he enjoyed his time at Colin’s he felt the time was right for a change.

Having spent a short time as a conditional rider Angus then turned back to the amateur ranks after joining Paul and has not looked back since. His target for the 2019/20 season to win the Point to Point novice rider championship was achieved along with a victory in one of Pointing’s most famous races, the Coronation Cup at Larkhill aboard Chameron, providing Angus with a memorable season.  This was topped off by riding a winner under rules for Paul on Alcala at Haydock in February.

Angus is a hardworking, good humoured and likeable young man which makes him a hugely popular member of the team here at Ditcheat.