A double at Ffos Las on Sunday maintained our sparkling recent form. Both winners were making their debuts for Team Ditcheat

It was good to see Estelle Ma Belle land the mares maiden hurdle in style because she had issues in the past before being sent to us by Jared Sullivan this season with a bunch of nice horses he transferred to us from Willie Mullins in Ireland.
She has had surgery on a splint and also a wind op. We’ve worked hard to get her right and I thought she’d run well though she is not yet the most fluent jumper. Lorcan Williams has been riding her at home which is why he partnered her on Sunday and he has done a good job on her jumping. We’ll see how Estelle Ma Belle comes out of the race before making a plan but she does need to be racing left handed.

Seelotmorebusiness completed the double on his first start in the second division of the bumper. He spent a period on the sidelines last winter after suffering a minor hairline fracture to a front leg and will come on bundles for this first experience on a racecourse.

A day earlier My Way gained an overdue first success with a comfortable all the way victory in a long distance maiden hurdle at Stratford. He looks tremendous at the moment, better than I’ve ever seen him, and is on course for a crack at the Badger Ales Trophy Chase at Wincanton.

I had high hopes of Pic D’Orhy on his chasing debut at Market Rasen but he was a bit novicey at some of his fences on his way to finishing a four length runner up to Le Patriote. There is lots to come from Pic D’Orhy and will now step up to two and a half miles . He is a case of “Rome was not built in a day “

On the flat Quel Destin relished the soft ground at Bath on Wednesday with a smooth victory in the staying handicap. I still can’t believe he was beaten in the same race a year ago off a mark of 66. He certainly put the record straight this time off a 2lbs higher mark with a cool ride from my daughter Megan.
Quel Destin, who had a wind op in the summer, is one to look forward to in novice chases this season. He is talented, tough and reliable.

With rain expected in the days ahead we will be sending some interesting runners to Cheltenham’s opening meeting on Friday and Saturday, and Truckers Lodge will be going to Kelso . Magic Saint will run in the Old Roan at Aintree on Sunday.

For all the up to the minute news on my weekend runners please be sure to check out my Betfair column which goes live at 5pm.

A memorable three days yielded nine winners for Team Ditcheat over the weekend at the start of what I always consider to be the core jumps season.

We enjoyed a fabulous time with a four timer at Chepstow on Friday, another quartet of winners there on Saturday and added a ninth at Newton Abbot with most of our runners in the money.

I always like to target Chepstow’s two day October meeting and have had plenty of success there over the years but nothing to match our tally of eight winners at the track this time. We’ve got a great spread of horses this season, the vast majority have been back in training since early July, they have done plenty of work and look brilliant in their coats. So heading over the Severn Bridge into Wales on Friday I was full of hope that we would have a rewarding couple of days.

Thyme White set the tone with an impressive success in a competitive looking four year old handicap hurdle. We’ve always liked him, he did well last season and is a much improved model of a horse this autumn. He has plenty of speed and will make a chaser but more immediately I am thinking of aiming him next at the Greatwood Hurdle at Cheltenham.

McFabulous was the next to strike with a stylish victory in the Grade 2 Persian War Hurdle. He jumped like a natural, travelled with eye-catching ease, led three out and strode clear like a smart horse. Harry Cobden said he was never out of second gear. Now that McFabulous has grown up and matured I feel he could well be the ideal type for the Stayers Hurdle at the Cheltenham Festival and he runs next in the Long Distance Hurdle at Newbury which should tell us a lot.

Flic Ou Voyou brought up the treble with an easy success in the maiden hurdle. He was just beaten by some decent horses last season but was never out of a canter on Friday as he strolled home unchallenged.

Then it was the turn of Present Man who relished the drying ground at Chepstow and bounced back to form in the Veterans Chase. He was up there the whole way and dug deep to snatch the verdict by a nose in a triple photo finish. All roads for Present Man lead to Wincanton where he will try to win the Badger Ales Trophy Chase for the third time next month.

Others to run well on Friday include Bravemansgame, who lost out in a tight finish and has a bright future , Enrilo, who will soon be winning over fences, and the lightly raced mare Kilmington Rose who was very green .

On Saturday our French recruit Hell Red looked smart in winning the opening juvenile hurdle in taking fashion. He is a proper horse, a chaser in time who jumps and gallops. Hell Red looks tailor made for the Grade 1 Juvenile hurdle at Chepstow over Xmas although he will have another run or two before then.

Several trainers chose to take their runners out on Saturday as the ground began to dry out but conditions were ideal for Secret Investor in the Native River Handicap Chase. He made all the running, won well and could be an interesting entry in the Ladbroke Chase at Newbury if underfoot conditions are in his favour.

Grand Sancy completed our hat-trick on Saturday in the Listed Novice Chase with a fluent display of jumping. He is tough, smart and stronger this time round and this race was a nice opportunity given his experience against some top rivals last season and will probably head to Wincanton next .

I was full of hope that Mont Des Avaloirs would register his first success over fences in the two mile three furlong handicap and it was disappointing that he fell late on after being headed by the winner Pink Eyed Pedro. He is quite sore but will be ok with lots of physio this week .

Knappers Hill then completed our second four timer at the two day meeting with a seven length victory in the first division of the bumper. A lovely, scopey prospect he is a half brother to the very useful pair Swamp Fox and Rene’s Girl.

On Sunday Flic Ou Voyou doubled his score in 48 hours under a 6lbs penalty in the opening novice hurdle at Newton Abbot. I had been thinking of seeing him chasing but may put that on hold for the time being.

Master Tommytucker had a nice clear round in the Intermediate Chase but ran with the choke out, was just a bit too fresh and was collared late on by Al Dancer who is a talented horse. He will improve enormously for the outing and needs to relax a fraction. When he does he will be fine.

In the novice chase Stormy Ireland jumped great, warmed to her task and was only just beaten by Eldorado Allen who is rated highly by Colin Tizzard. She joined us a shade later than most of ours and will come on a bundle for the race. Harry Cobden loved Stormy Ireland who has the option of being campaigned in mares’ races.

We could be busy again next weekend with runners at Stratford, Market Rasen, Kempton and Ffos Las though plans depend on how much rain we get over the next few days. If the ground is suitable I’d like to send Pic D’Orhy to Market Rasen on Saturday for a novice chase we’ve won with Azertyuiop and Dynamite Dollars. The next day Fidelio Vallis is likely to go for a Listed novice hurdle at Kempton where Diego du Charmil is pencilled in for a conditions two mile hurdle.

For all the latest news on my runners please be sure to turn to my Betfair column that goes live on Friday and Saturday at 5pm. 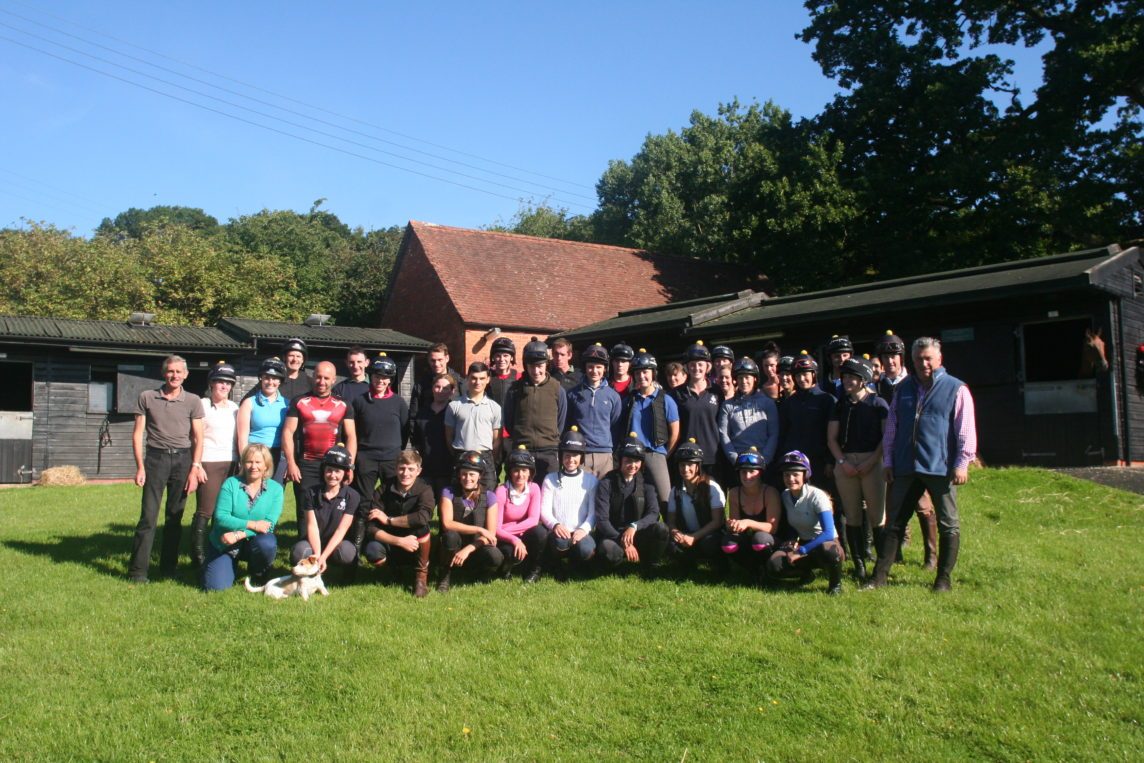 We currently have a great team of staff but are always interested to hear from anyone with previous experience in racing or those with backgrounds in other equestrian disciplines.

Our Full Time positions offer the chance to enjoy riding and looking after top class horses. Applicants must ride well and be capable of all stable duties and will also have the chance to attend race meetings.

We can offer regular hours, good single accommodation if required plus excellent wages and bonuses.

For those who are interested there is opportunity to study for Level 3 Diploma in Racehorse Care and Management for the right candidates (see www.brs.org.uk/courses/advanced-apprenticeship-level-3-diploma/ for more details)

We occasionally have vacancies for part time riders so if you have the necessary experience to help exercise our horses please get in touch!

Please email info@paulnichollsracing.com to apply or for more information.

No comments by Paul Nicholls Racing